Part I: Introduction and Overview

Stata is a powerful statistical software program that can be used to process, clean up, and structure any type of data. With Stata, you have access to a wide range of statistical operations for the analysis and interpretation of your data. The personal exchange of information, as well as getting help with issues regarding programming and estimation, is made possible by the active user community in the Stata Forum. This community also actively and independently makes a wealth of current graphical and statistical tools available to the public so that new trends can be employed with the software as they arise. Some of the commands written by independent users are published in the Stata Journal and many others can be found in the Statistical Software Components archive provided by Ideas. Although your progress in learning to use the software may appear slow in the beginning, the utilization of Stata ultimately proves to be simple, fast, and accurate. The initial investment is absolutely worth it, as common, repetitive tasks can be perfectly automated.

This tutorial is organized very similarly to my course, „Introduction to Stata“, at the University of Würzburg, and is largely based on Kohler and Kreuter (2012): Data Analysis Using Stata, 3rd Edition. We start with a brief introduction to the structure and syntax of the software. The most important programming tools are used to make initial adjustments and transformations of prepared data sets. Since government organizations, statistical organizations, and businesses often provide their data as Excel files, we place particular emphasis on importing data from Excel. A course project often involves collecting data from different sources in order to obtain a wealth of individual data sets. Therefore, we take a look at how to combine multiple data sets in Stata to produce one unified data set for the subsequent analysis. Since a picture can say more than a thousand words, we will also concentrate on creating graphical depictions using Stata.

When you start Stata for the first time, you will see five windows in the default interface. 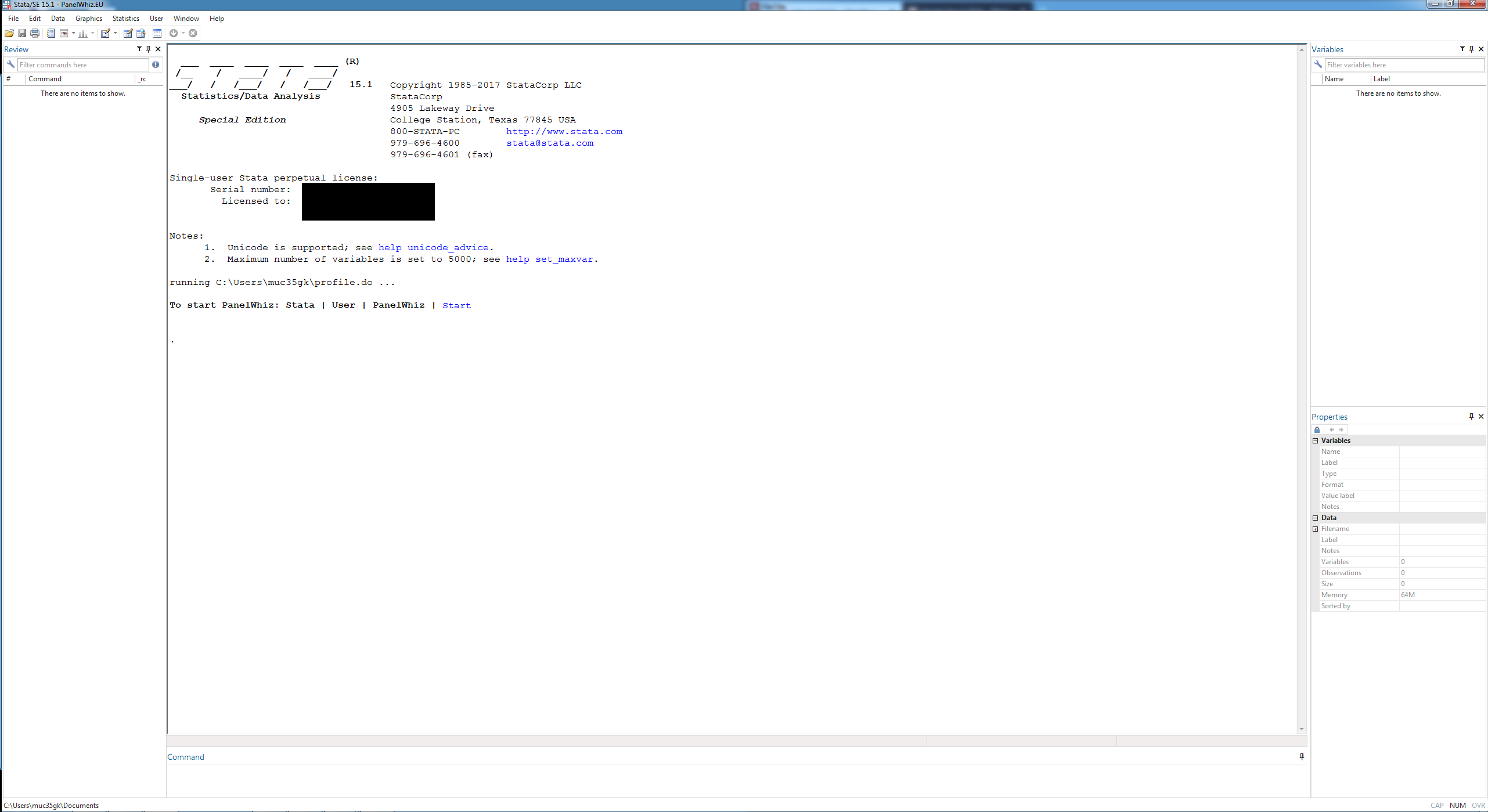 The is where you type your commands. When you have done so and press Enter, the result of your command appears in the larger window above, called the . Your command is added to a list in the on the left so you can keep track of the commands you use during a session. The , on the top right, shows the variables in your data as well as their labels. The immediately below it displays the properties of your variables and dataset. You can resize or even close some of these windows. Stata remembers previously chosen settings the next time it is opened. I recommend that you close all windows except the and windows, since the features of the other windows can be called up at any time via the command line.

At the beginning of each term, I usually set forth 3 commandments to my students for their daily work with Stata:

Don’t forget to set the path to your working directory within quotes if some subfolders have blanks in their names. I recommend that you create a separate directory for each course or research project you are involved in and start your Stata session by switching to that directory. As you can see, Stata is not sensitive to the chosen slash type, and when front slashes are applied, it converts them directly to backslashes. The dot at the start of the line is how Stata marks the command lines you type and is not part of the command. Thus, you don’t type the dot when writing and executing a command.

Stata files located on the drive may be opened via the command use. When doing this, it is always useful to include the option clear, which guarantees that the previously loaded data set is removed from Stata before the new data set is loaded. To load a new data set, you can enter the entire new path directly.

Or, if you are already located in the required folder within the command interface, you can just enter the file name. Stata’s data files are always designated via the file extension .dta.

A few sample data files are included with the Stata software. During the tutorial, we load different sample files using the command sysuse as well as some prepared files from this website. Let’s start with lifeexp.dta, which features data on life expectancy and gross national product (GNP) per capita in 1998 for 68 countries. With the command browse, you can open the window, which displays the current data.

You can see that Stata regards the data as one rectangular table and data are displayed in multiple colors. 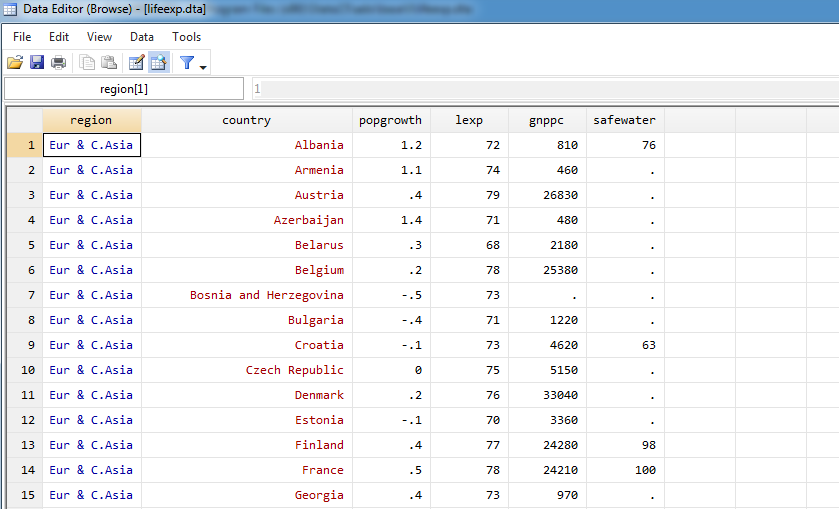 If you want to make changes to the data directly from the data editor window, type edit. Now changes can be made within each cell of the data set. But I urge you to avoid this approach, as it is error-prone and not reproducible.

You can see that the data set contains 6 variables and 68 observations. The variables have variable names that can be used within commands and variable labels that provide user-defined information about the variables. The describes the way Stata stores its data. For now, it’s enough to know that variables with the storage type str are or variables, whereas all others in this dataset are . There is another nice feature provided by Stata. If the cursor is placed within the command line area, you can use the Page-Down and Page-Up keys to navigate through previously used commands.

Stata has excellent online support. Since Stata has thousands of commands, and some of them feature thousands of additional options, it is basically impossible to memorize all of them. Therefore, it is more important to know where to look to find answers than it is to learn them all by heart. To obtain help via the command summarize, type

, and help information will be displayed on a separate window called the .

If you don’t know the name of the command you need, you can search for it. Stata has a search command that will search for keywords within the support documentation as well as other resources. Just type, for example,

to search for Stata commands that can calculate inequality measures based on survey data. One of the most convenient features of Stata is that all documentation on the commands is available as PDF files. Moreover, these files are linked in the online support interface, so you can jump directly to the relevant section of the manual from within the Stata Viewer.

If you have a data set with a large number of variables, you might also be interested in the lookfor command, which enables you to search for and display certain words or letters found in variable names and variable labels. For example, let’s search for the word in nlws88.dta

Although there is no variable in the data set that contains the word , there are three variables whose variable labels contain the word .

3  Some Descriptive Statistics and Conditions

The data editor can be used to take a first glance at the data. You can also display specific data points (or all data points) in the Results window with the command list. Let’s use the data on life expectancy again and take a look at the variables country and popgrowth

If your data have many observations, your listing may stop short, and you may see a blue --more-- Tag at the base of the Results window. Pressing the Spacebar or clicking on the blue --more-- will allow the command to be completed. However, if you want to stop tedious scrolling, just press the key and you can continue working.

Let’s run some summary statistics using the summarize command followed by the variables which you are interested in.

We see that life expectancy averages 72.3 years and its standard deviation is 4.7. Further, life expectancy is between 54 and 79 years across all countries included in the data and there are 68 countries with valid observations. We also see that Stata reports only 63 observations on GNP per capita, so we must have some missing values. If we are interested in the median or other statistical moments of GNP per capita, we can use the option detail. The portion after the comma contains for Stata commands. So we type

For certain variables we want to know how often specific values appear in the data. This naturally only makes sense with nominal- and ordinal-scaled variables with a limited number of unique values, such as gender or educational attainment. We can do this with one-way tables via the tabulate command. Let’s take a closer look at the auto dataset, which is a record of diverse car models in the US in 1978.

You can see that roughly 70% of the cars are domestic, whereas 30% are foreign. The value labels of the variable foreign are used to make the table nicely readable. Now, if you want to tabulate the differences in prices across the cars‘ origins, you need a one-way table of car type (foreign vs. domestic) within which we see information about car prices.

This chapter gives a basic lesson on Stata’s command syntax via the example of the list command while showing how to control the appearance of a data list. The syntax for the list command can be seen by typing help list:

Anything inside square brackets is optional. For the list command,

If a part of a word is underlined, the underlined part is the minimum abbreviation. Any abbreviation at least this long is acecptable. Since the l in list is underlined, l, li, and lis are all equivalent to list. The in qualifier uses a to give a range of observations that should be listed when it is applied to the list command. have the form of one number or /. Positive numbers count from the beginning of the dataset, whereas negative numbers count from the end of the dataset. However, the beginning and the end of the dataset depend on the sorting of the data. Employing the sort command, the data can be sorted in an ascending order by one or more variables.

The if qualifier uses a logical expression to determine which observations to use. If the expression is true, the observation is used in the command; otherwise, it is skipped. The operators whose results are either true or false are

In the logical expressions, & is evaluated before | (similar to multiplication before addition in arithmetic). You can use this in your expressions, but it is often better to use parentheses to ensure that the expressions are evaluated in the proper order. To illustrate the if qualifier, let's use a random sample of the German Socio-Economic Panel (GSOEP). The GSOEP annually surveys adults in Germany about their demographic and socio-economic characteristics. The altered random sample gsoep.dta is available at my website and can be loaded directly in Stata if you have an internet connection. Now, let's find out what the average income of people younger than 30 years old is in the GSOEP sample. Hereafter, we want to know what the average income of adults who are 25 to 55 years old is. Although the summarize command can be abbreviated to two letter, I prefer the more common abbreviation sum.

As you can see, there are 857 persons that are 30 years old or younger in the dataset, and their average yearly income is 10507 Euro. Persons who are 25 to 55 years old earn, on average, 28261 Euro, whereby this age group's range of incomes is relatively large, ranging from 0 to 897756 Euro. Furthermore, the GSOEP sample contains the variable gender, which is a string variable and the gender indicator of the random sample. Now, if we want to calculate the average yearly income of women, we must type

The string variable gender has two distinct characteristics, namely "Male" and "Female". In Stata, strings must always be written in quotations marks.